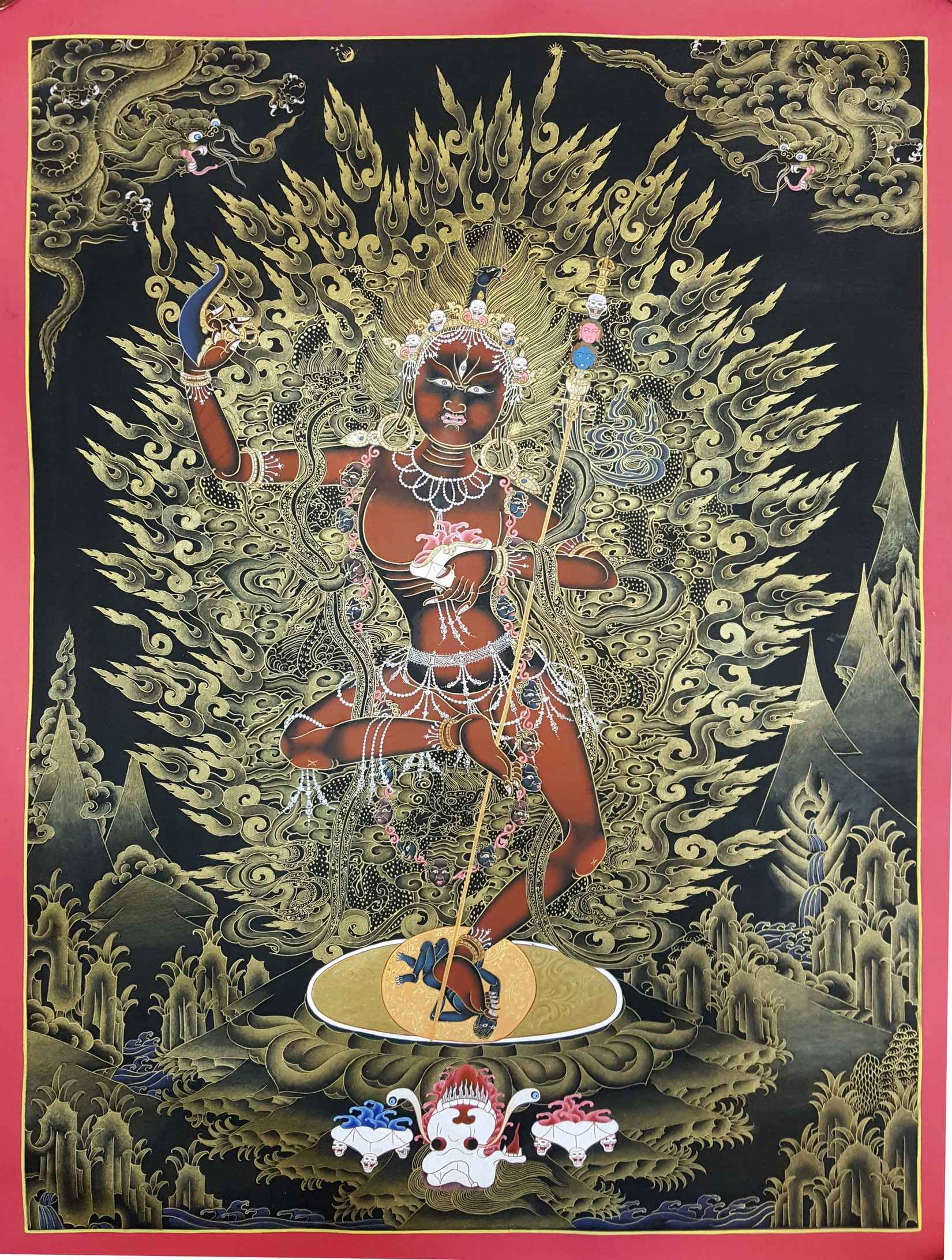 Vajravarahi thangka is handpainted in Nepal by using traditional Color. She is protective & simply wrathful for beneficial reasons. Vajravarahi is a Dakini & spiritual energy perceived to transmute the Five Negative Afflictions.

Vajravarahi is presented at the center of the thangka.

She is the red-colored tantric Dakini emanation of Transcendent Buddha Vairochana not to be confused with blue Nairatma who is an emanation of Akshobhya or red Vajrayogini who is painted standing on two figures with less iconography. She is a very important figure because Vairochana the great illuminator is the head figure in the Transcendent Buddha group around whom the other. Vairochana represents the possibility of Great illumination or.
The crown of five skulls symbolizes Vajravarahi’s power to transform the five negative afflictions Vajravarahi Buddhist Art Tibetanor troubles into the Five pearls of Wisdom. Her threatening Tarjani hand gesture [Skt. Mudra] also known as Karana mudra is made with a raised index & little finger & by folding the other fingers usually around an object represents her energy aimed at clarifying ignorance. In this case, she clasps a flaying knife [Skt. Kartika] symbolizing her breaking the power of materialism.

Theword Kartika comes from the name of Shiva’s Son. Her right-hand pours self regenerating uterine blood into her mouth from a skullcap [Skt. Kapala] representing her independence from the material world including men. Vajravarahi is painted with a magical tantric staff [Skt. khatvanga] leaning against her shoulder & which has impaled three heads. The first blue head is freshly severed, the second redhead is in decay, and the third a white skull.

Vajravarahi stands in Satyalida position with one leg held aloft & the other trampling on the deity Kalatri representing the ego. She wears a necklace of fifty human heads as a symbol that she vanquishes the fifty negative emotions or ‘forms’ she has overcome. She is shown in a celestial dance position upon an orange sun disc associated with the feminine wisdom aspect & on a Lotus Throne representing Great Bliss, and her overall figure is surrounded by a circle of flames of immaculate consciousness. The trees in the left foreground are the Ashoka Tree.